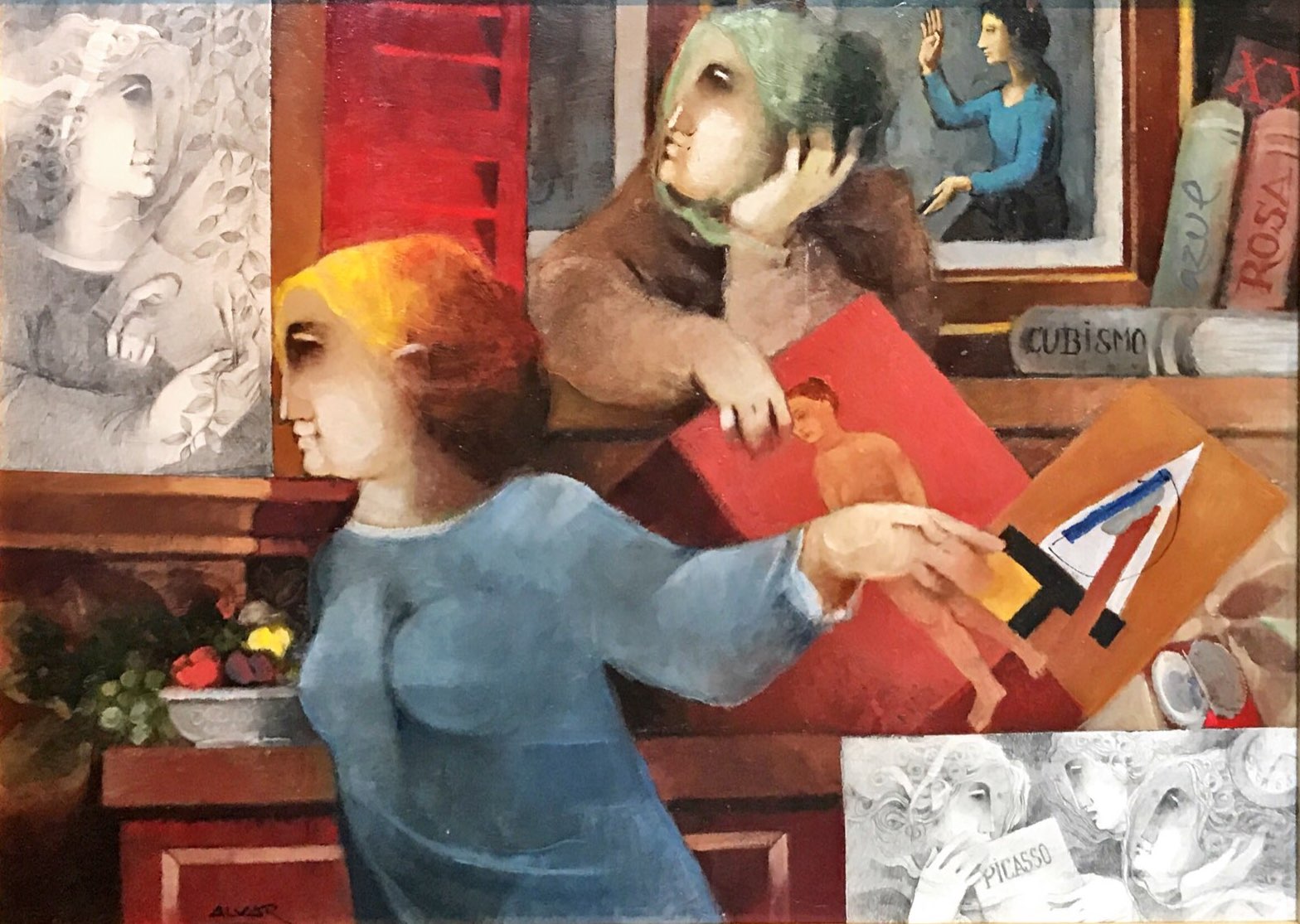 Alvar Suñol | Blau, Rosa, Cubista | Oil on Board with Drawing | 20" X 28"
$24500
The title translates to "Blue, Rose, Cubism" and refers to the large capacity and creativity of the artistic genius of Pablo Picasso. These three words refer to a few of the different artistic periods of Picasso's career. In the top center, a work of Picasso's Blue Period Femme a l'eventail (Lady with Fan)(Paris, 1905) is shown. In the center is the Gran nu debout of the Rose Period, painted in Gosol 1906. Next to the Rose Period work is one of Picasso's Cubist works painted in 1913. In order to enhance praise of Picasso's artistic dexterity, Alvar creates his own piece to emphasize the red and blue colors within the scene, as if to layer importance of these colors and of these experimental time periods. Alvar's figures also contribute to his homage. The figure on the left drawn in pencil is a figure encompassing human creativity and the desire to make art. Alvar's figures are surrounded by nature, which symbolizes the creativity nature of the great Picasso. 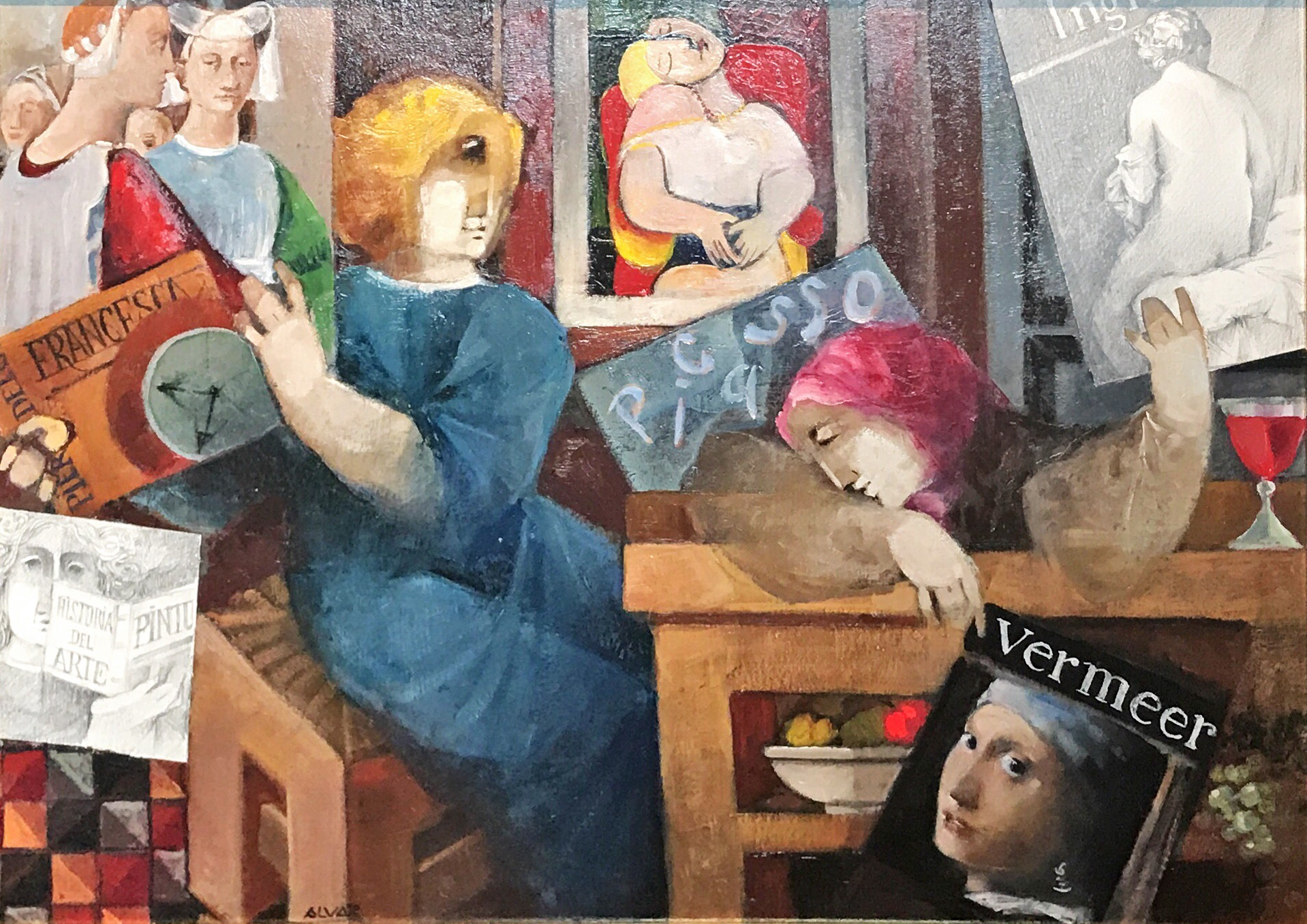 Alvar Suñol | Homenajes (Homage) | Oil on Board with Drawing | 20" X 28"
$26500
Alvar celebrates the artists that have imparted the most influence on his work. References to Renaissance painter Piero della Francesca, Dutch Golden Age artist Jan Vermeer, and modernist Pablo Picasso are prominently upheld by inspirational muses. A clock seen in the painting suggests that each artist represents a unique generation in art history, and that their accomplishments continue to withstand the test of time. Alvar frequently pays tribute to these renowned artists in his works. 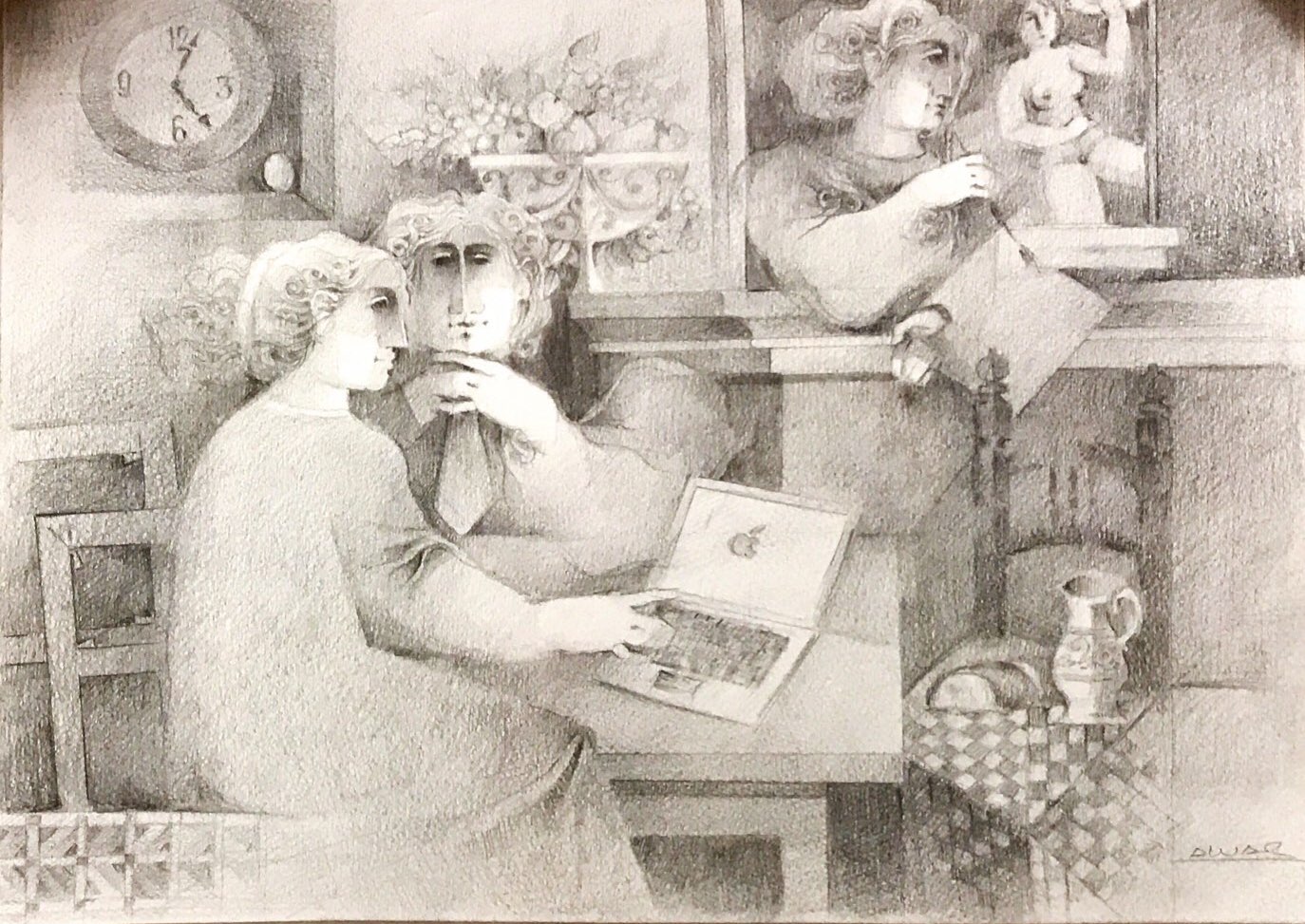 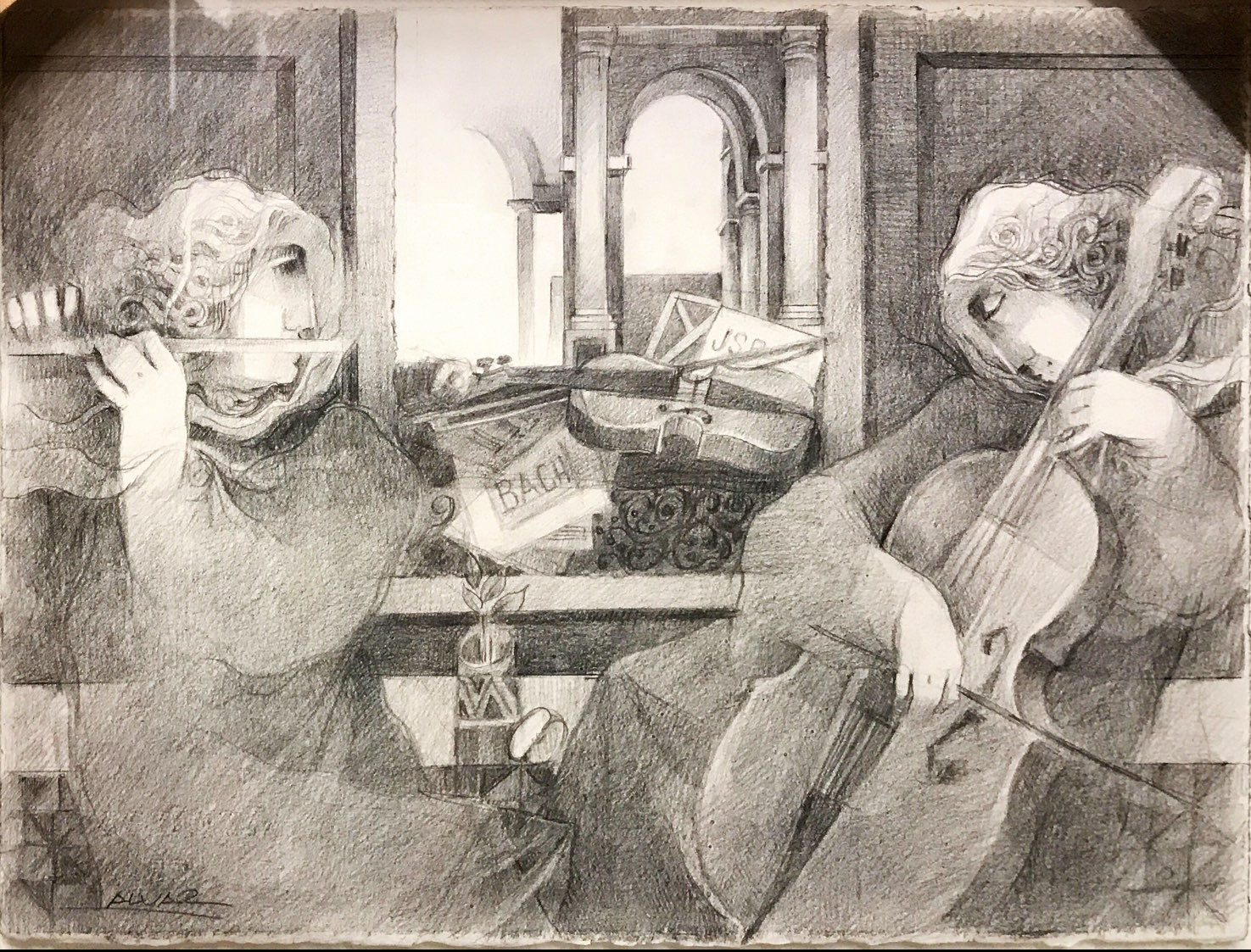 Alvar Sunol Munoz-Ramos was born on January 20, 1935 in Montgat, a Catalan fishing village on the outskirts of Barcelona, Spain. Sunol Alvar grew up on the sunny Mediterranean coast with his father Tomas, mother Antonia and his older brother and sister, Jordi and Amadea. Showing a great artistic talent as a youth, he attended the prestigious Sant Jordi Art School in Barcelona at age 16. At age 18, Alvar won the Alhambra de Granada grant, a summer scholarship that allowed him to travel and paint throughout Spain. This was the birth of Alvar's style and the laying of the technical foundation that would accompany him over the following years. Alvar returned home and entered a painting in competition for the Young Painter's Prize sponsored by the City of Barcelona. He won the Grand Prize and the painting was acquired by the Museum of Modern Art in Barcelona for its permanent collection. In 1957, at age 22, Alvar gave his first one-man show at the Galleries Layetana in Barcelona. The exhibit was a great success and Alvar received many invitations for shows in other Spanish cities. He entered one of his canvasses for the annual painting competition at the French Institute of Barcelona. He again won the Grand Prize, and with it a study trip to Paris. Alvar arrived in Paris to paint in 1959. He met Juan Fuentes, a fellow Spaniard and director of the prestigious Gallery Drouant. Fuentes brought Alvar's first group of Paris oil paintings to the gallery. All of the paintings sold in one week. He was subsequently invited to join the celebrated School of Paris, a group of the top young artists in Paris, organized by the distinguished Charpentier Gallery. Alvar returned to Barcelona in 1960 to marry his childhood sweetheart, Rosella Berenguer. They returned to Paris and lived there for the next ten years. His paintings were exhibited in the United States for the first time at the Monede Gallery, New York city, in 1962. Alvar produced his first original lithographs for a one-man show at Gallery Drouant in 1963. In 1970, Alvar and Rosella left Paris and returned to their beloved Spain to raise their three young children. He has lived there ever since. Sunol Alvar has exhibited regularly throughout the world over the years. His highly prized lithographs were honored with an exhibition at the Hyacinth Rigand Museum in Perpignan, France. The Utah Museum of Fine Art, Salt Lake City, Utah and the Wichita Art Museum in Wichita, Kansas have held major exhibits of his lithographs, paintings and sculptures. Following the great tradition of other great Spanish painters of the 20th Century, including Joan Miro, Pablo Picasso and Salvador Dali, the unique and distinctive artwork of Alvar Sunol Munoz-Ramos has taken a revered spot in the history and iconography of our times.