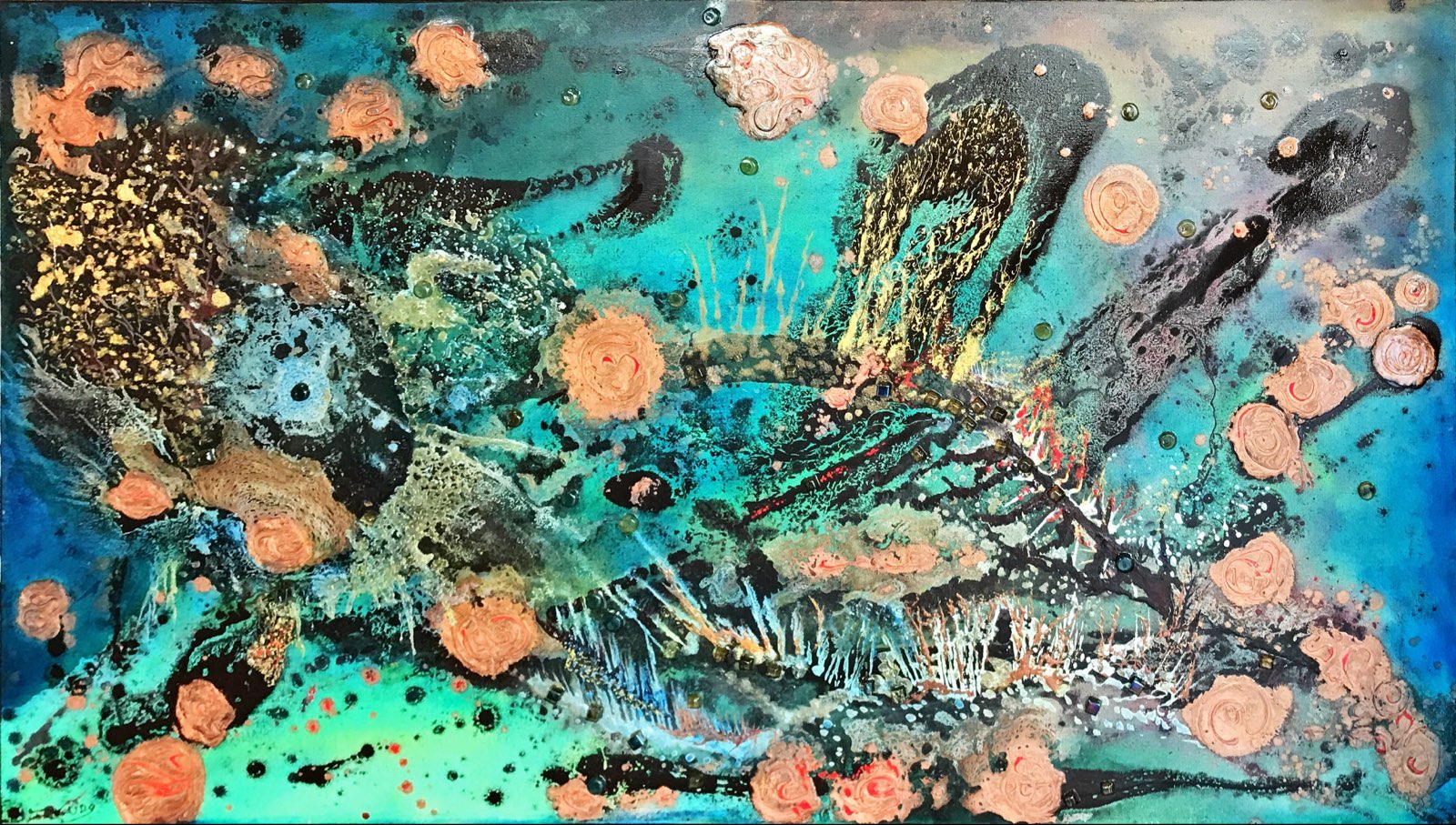 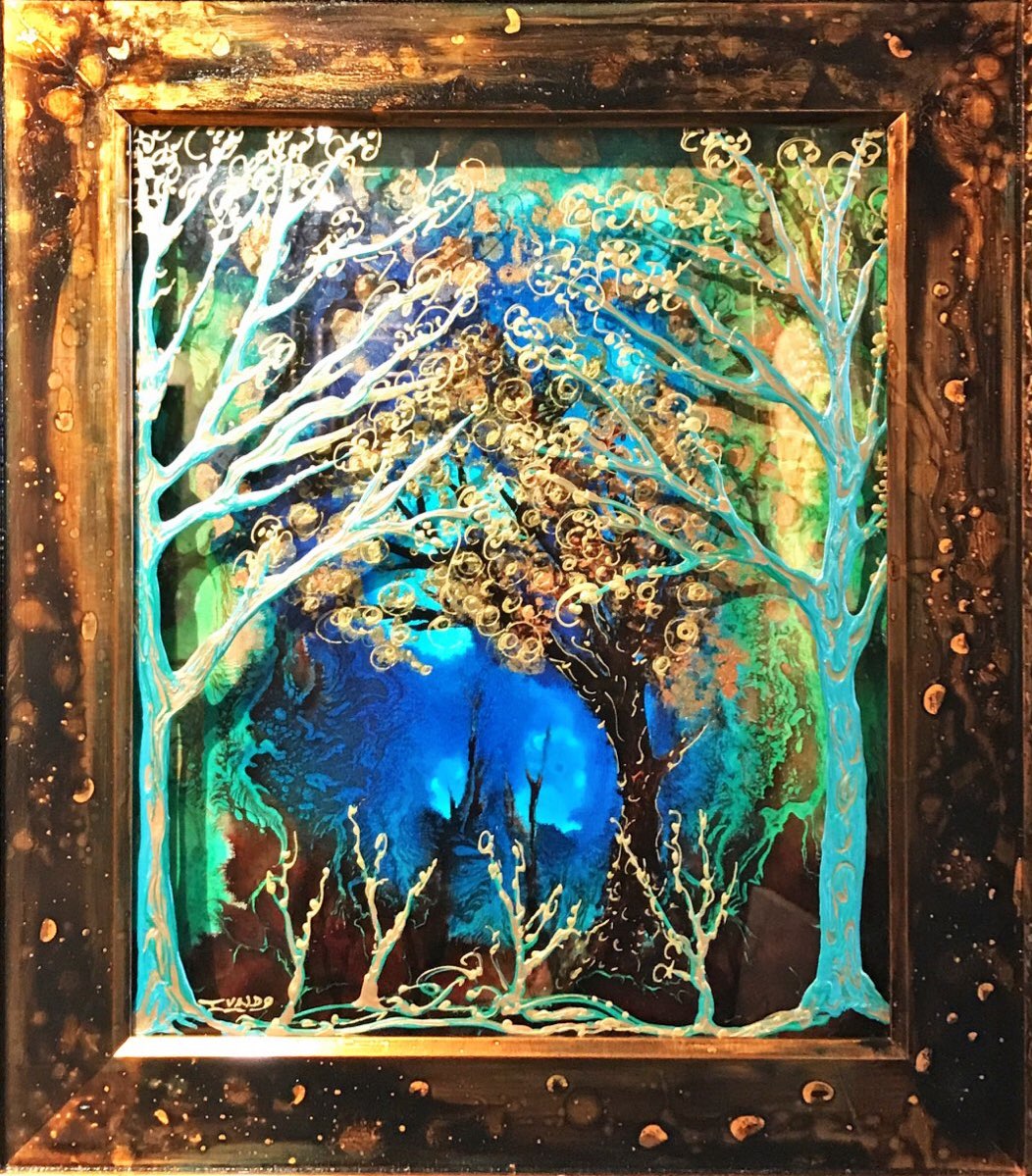 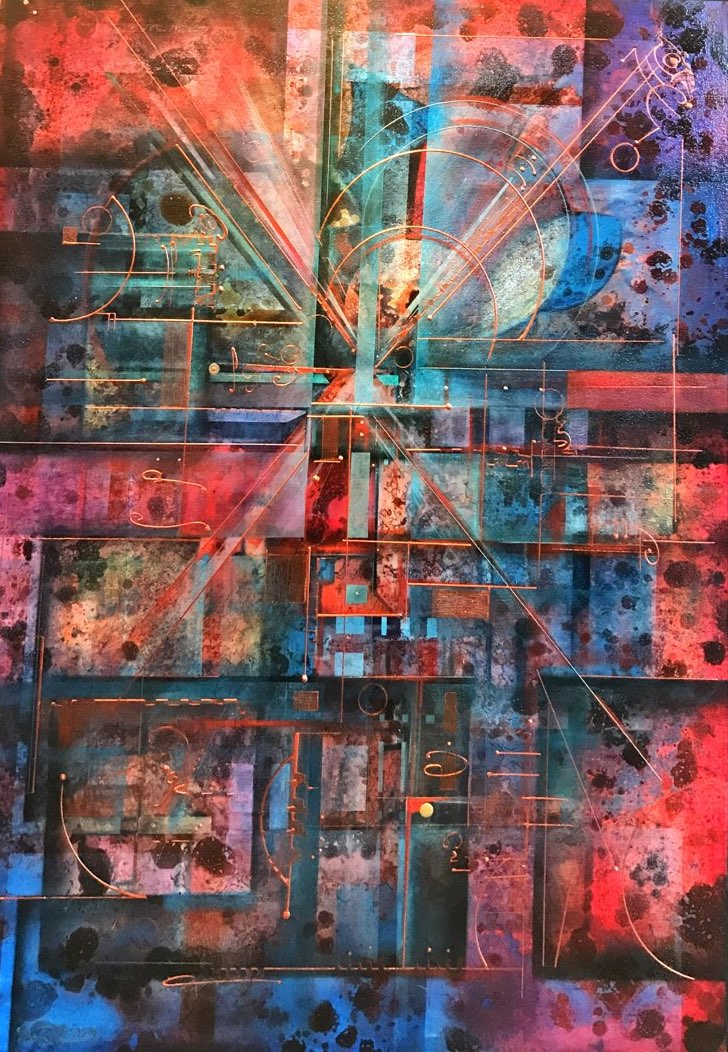 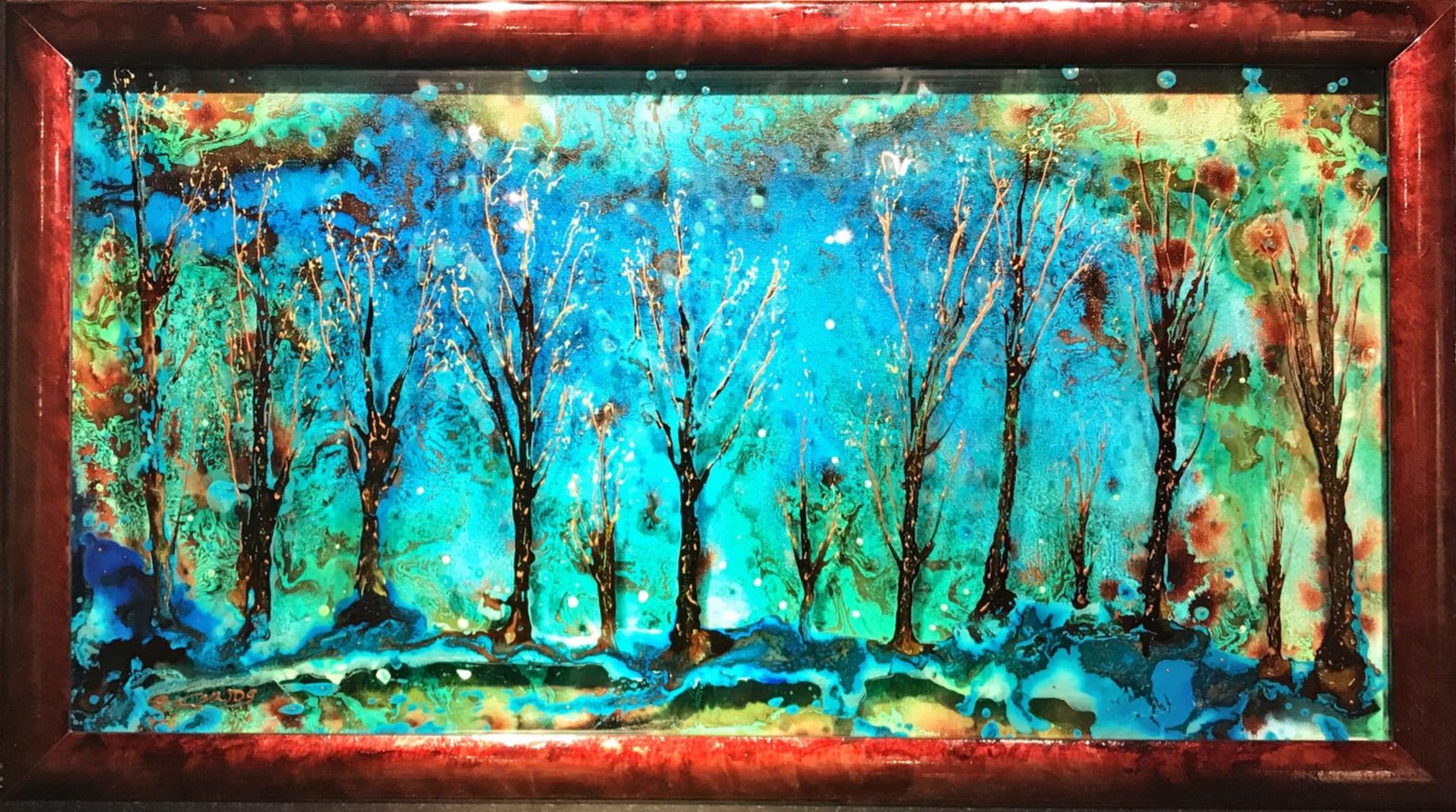 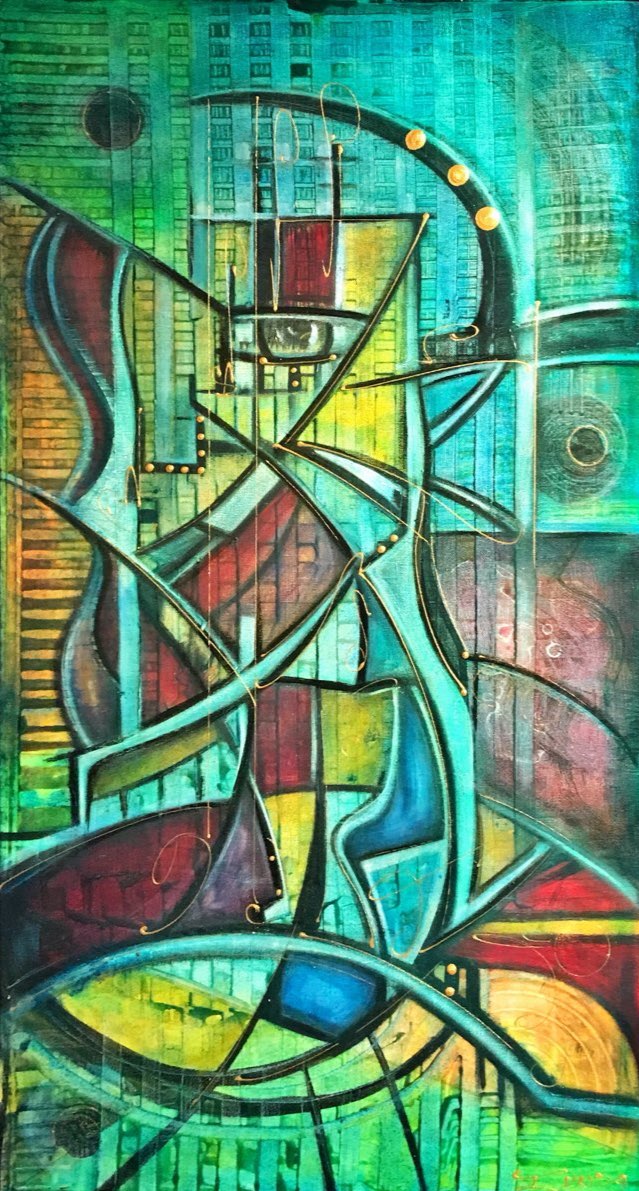 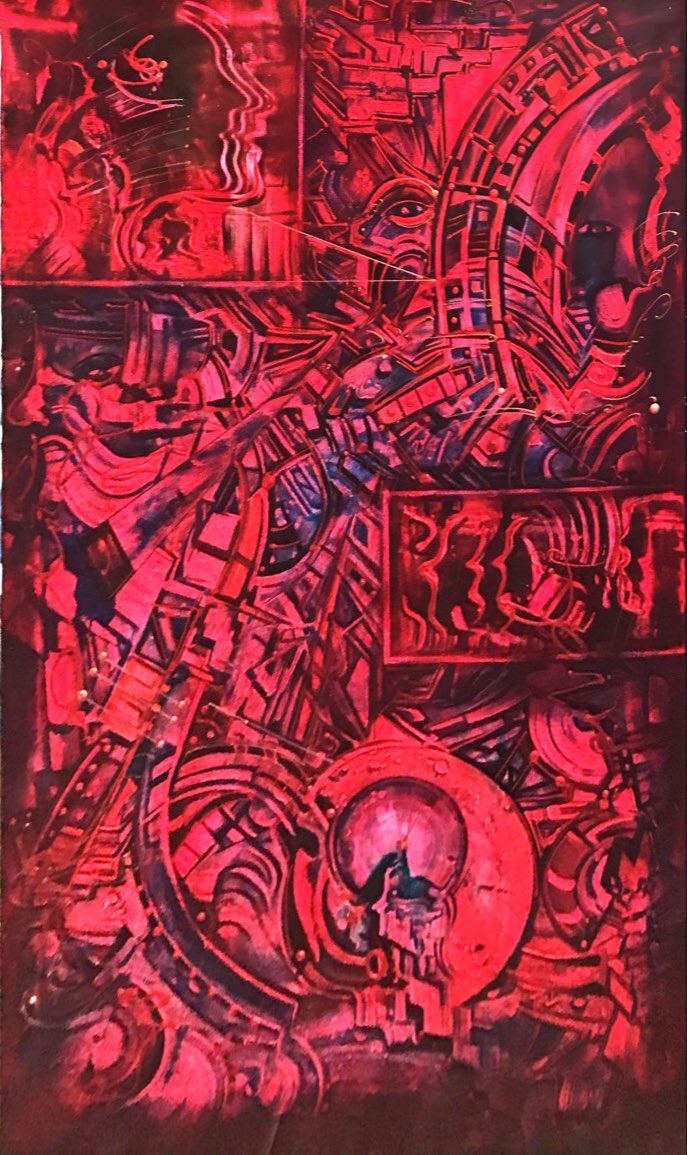 Raised in Mexico, Ivaldo came to love art as a natural artist, inspired by his surroundings. Through his art he started using texture as a means to convey the beauty and complexity he found in his world – both external and internal. At first he experimented with different techniques and approaches to his artwork and through this process managed to cross the chasm between lifelike and abstract art. His present work straddles along neither side of the spectrum, but within the actual divide. “It’s referential to nature and the ‘real world,’ but not to their physical embodiments,” says Ivaldo. A forest glimmering under the noonday sun isn’t just an “outdoor scene,” but a perception created through various visual inputs.

Working with oil and mixed-media elements, Ivaldo creates different textures combined with movements and layers that create windows into colorful dimensions. Working without traditional limitations, Ivaldo sculpts and moves around the canvas searching for himself in a place where painting becomes an adrenaline-fueled event of skill and dexterity. From there his creations progresses along with his soul through the unknown moments that are fed by internal visualization, passion, and free flowing emotions.

When one stands in front of Ivaldo’s work one will invariably come up with a thousand syllogisms that all end with the same one-word conclusion about his body of work: charged. Charged with energy, intellect, introspection, inspiration, passion and a seductive mystery.  His work is an unearthly window into his soul. Whatever he is able to extract from his subconscious, he layers on canvas or glass with vigor and skill. These two mediums give meaning to each other as much as the actual subjects he uses. As an artist, he is more interested in the way texture, material and medium come together and their harmonious effect on the visual representation of his ideas, rather than the literal representation of his chosen subjects. The shadows created by layering painted glass on a painted backdrop not only create an additional dimension to the work, but also a deeper emotional and intellectual construction that any observer can easily access. It’s as if Ivaldo is inviting you to understand the world beyond what they are seeing in his artwork.

When Ivaldo talks about his art, the listener is instantly lured into his labyrinthine dialectic that makes up the inspiration for his work. One either dives in deep with him or completely misses the point of the dark shadows, overlapping shapes and the sheer intensity of textures that he deliberately creates on his pieces.

Arshile Gorky, Mark Rothko, Jackson Pollock and William de Kooning are only some of the artists in post-World War II America who espouse a similar school of aesthetics. In 1946 this style was coined as “Abstract Expressionism” by Robert Coates, an art critic for The New Yorker. Technically, the important predecessor to this wave of artistic expressions is surrealism, with its emphasis on spontaneous, automatic or subconscious creation.

Artists who were said to be part of the Abstract Expressionism movement in New York valued the inner workings of their psyche and developing their individual spontaneous techniques. Abstract Expressionist painters rejected representational forms of Impressionism and other European art movements, seeking an art that communicated - on a broader scale - their inner state through a universal visual language. Though these New York-based artists were loosely affiliated, they were a collective force in the art world of the mid-century America, placing America at the top of the global post-modern art scene, right above Paris. Even today, their influence still permeates the aesthetic of many contemporary artists such as Ivaldo

As he paints and creates, his aim is to traverse the unknown crevices within himself and through his art, emerge with a form of meaning that will bring him to a oneness of mind, body and soul he couldn’t have deduced from any other experience or source. As he admits, when he loses himself in deep inspiration the process of “sculpting and moving around the canvas,” it usually transcends into a soul-searching session.

Ivaldo’s work is collected internationally and has been assimilated into the permanent collections of many public spaces including the colossal, newly-built Amway Arena in Orlando, Florida.